Book Review: The Warmth of Other Suns by Isabel Wilkerson 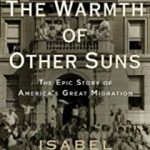 I wish I’d read a book like The Warmth of Other Suns: The Epic Story of America’s Great Migration (Vintage, 2011) as a teenager or young man, growing up in the South. Instead of spending the first several decades of my life rather blind to my own white privilege, I might have ventured out of my comfort zone and built far more relationships with black men and women, and done more to fight the racist agenda, policies, and ideas that continue to proliferate in this “colorblind” society.

But I’m grateful that my eyes have fluttered open in recent years; and am especially grateful to Pulitzer Prize-winning journalist Isabel Wilkerson, and her superb narrative nonfiction epic, the product of nearly 15 years of research and interviews with more than 1,200 persons, that chronicles the “great migration” of black Americans out of the South, in search of what writer Richard Wright called “the warmth of other suns.”

Wilkerson, herself the daughter of black migrants from the South, offers a book that is devastating, lyrical, and necessary. The plight of post-slavery black Americans under Jim Crow was exponentially worse than one could possibly imagine without reading this kind of a book. The flight of millions of these courageous, hard-working men and women to the North, Midwest and West led not to cities that provided freedom and caring, but to unofficially segregated neighborhoods, white exodus, inflated housing costs, poor job prospects, and the anguish of seeing some of their grandchildren lose themselves in drugs and gangs. Despite a lifetime of difficulties and hurdles, they persisted and did their best to start over in a country that had largely failed to acknowledge their full rights as citizens.

What is to be done in the aftermath of reading such a profound work, one that powerfully illustrates the lasting impact of slave owners who stole countless persons from their native continent from the 1600s through the early 1800s to begin with, leading to generations of prejudice and poverty that continue to this very age of mass incarcerations and unjust police shootings, hindering the potential of so many young black men and women?

Here’s some initial ideas: Reflect on your own privilege. Take the risk to listen to, understand, and care about black people. Build relationships. Share life, work, and resources. Continue to learn about the realities and dynamics affecting anyone who is less privileged than you are.

Such persons are not hard to find, especially if you’re willing to look.

That’s how I’m striving to live my life. I only hope that a critical mass of other persons similar to me, who couldn’t possibly know what it’s like to be a black American, will do the same.

Then, just maybe, a more hopeful book can be written one day that chronicles the outcomes of black Americans in this 21st Century. Maybe, one day, their own sun will be more than warm enough.